Chevrolet or “Chevy” is a division of GM. Producers of the fantastic Corvette.

I have a lot of Chevrolets in my collection of diecasts,  Chevrolet is second only numerically to Ford.

I have at least 104 Chevrolets in my collection, I don’t buy into the Ford v Chevy rivalry as I love both brands, the second and third generations of the Chevrolet Corvette look amazing to me.

As an iconic American brand, it is unsurprising that most of my Chevrolets are Hot Wheels (65 of them).

Hot Wheels put out several new Chevys each year. Aside from the Corvettes, I love collecting the Wagons and Gassers. 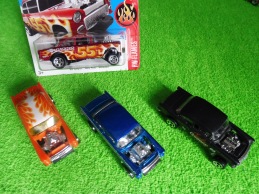 I have 40 Corvettes, a car that has been in production since 1953, named after a small manoeuvrable warship, there have been eight generations of Corvette to date, my favourites being the second (1963-1967) and third (1968-1982) generations. Designed to interest returned American servicemen who had fallen under the spell of Jaguars, MGs and Triumphs during their World War II service in Europe, the Chevrolet Corvette was the first proper American sports car.

For a long time the 1:24 scale Maisto 1970 Chevrolet Corvette was the largest model in my collection, it is still my biggest Chevrolet but now a 1:18 Scale Mercedes 300SL is my biggest model.
Whilst most of my Chevys are standard Hot Wheels (3 inch) size, I do have a few larger models, including two rather beat up Corgi Chevrolet Stingrays.

Matchbox has put out far fewer Chevrolets than Hot Wheels, but I still have 21 in my collection.

I first encountered Majorette when I visited Paris at the tender age of 9, way back in 1974. They were similar in size to Matchbox but Made in France not Made in England. The first model cars appearing  on the market under the Majorette name came out in 1964.

I don’t remember seeing Majorette in the UK in my childhood. From Paris I brought back a couple of models, if I remember correctly a Chrysler 180 and a BMW 3.0CSL (I no longer have the models from my childhood).

Here in Tbilisi, the distribution is variable, XS Toys have just put up some display units  for Majorette, which they seem to be promoting at the expense of Hot Wheels.

Prices vary according to the range from 6.95 lari ($2.81) for unbranded “Fiction Racers” to 12.50 lari ($5.05) for “Limited Edition” and “Farm” ranges.  When I last looked they had a lot of Fiction Racers but not many models in the Limited Edition and Premium ranges. Other ranges are called : Street Cars, SOS (Emergency Vehicles), City, Lamborghini, Vision Gran Turismo and Farm ranges and some aircraft.

Some of the models especially in the Premium range have opening parts like this Camaro.

The full current range can be seen at their website… Majorette.com

I’m looking out for the Jaguar F-Type, a model which currently eludes me in Matchbox and Majorette.

Majorette recently returned to the American market after a long absence, but I don’t know how they will fare given the difficulties of Toys R’Us, the chain selling them. Majorette are returning to the US Market

The packaging can be blister packs or boxes.

As one of the best known French manufacturers of model vehicles, Majorette knows how to appeal to car enthusiasts. What spurs us on is a desire to design increasingly better and more realistic vehicles for young and old that give pleasure to the whole family. The particularly well-processed materials mean that our products are guaranteed a long life.

…collecting diecast cars, like the 3" Matchbox cars I had as a kid